At Suncamp we love camping! The same goes for our colleague Bobo who travelled with his wife, two youngest children (fifteen and nineteen) and dog to Via Claudia Camping in Lechbruck am See in Bavaria. I talked to Bobo about his holiday and he told me all about camping with a dog and the various trips you can take with two teenagers. This is what he said:

What did you think of Via Claudia Camping?

We’ve had a very nice holiday at Via Claudia Camping. One of the big advantages was that the campsite does its best to accommodate dogs. It was a great place for our energetic 8-month-old puppy. There were fenced-off camping pitches allowing the dog to walk around freely, and the doggy playground was not just a field, but a nice and varied sloping terrain. There was even a stream to splash around in. Dog-waste bags were handed out at reception and there were also plenty of rubbish bins, so the grounds looked spick and span.

‘The campsite feels small and is ideal for dogs!’

We were very pleased that the campsite felt small. It’s a big campsite, but on the camping fields you really have that cosy campsite feeling. They did a good job. It’s also easy to get in contact with your neighbours. And the toilet facilities were clean and tidy. That’s important to get right! 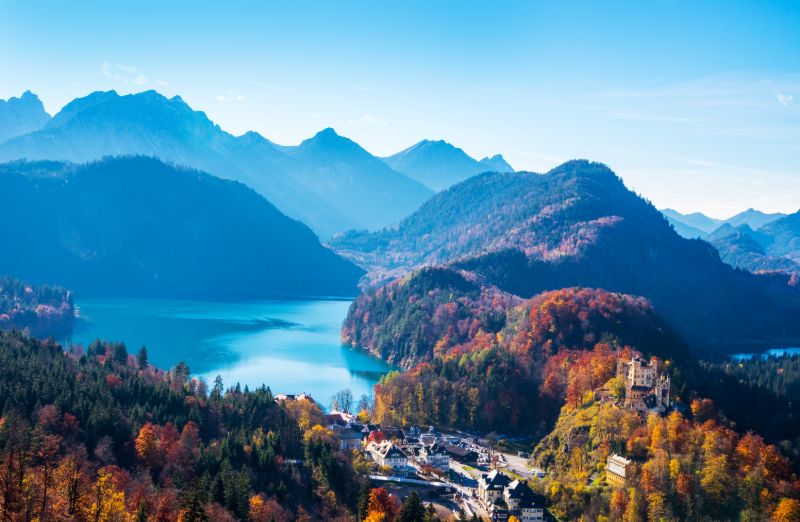 Bavaria, and the south of Germany in general, is just a beautiful holiday region. You are close to the border with Austria and have a view of the Alps. You can enjoy walking and cycling and there are lots of swimming lakes. A camping holiday really allows you to experience the space and vastness of the southern German landscape. Bavaria is generally clean, tidy and well organised. That doesn’t mean it feels sterile, there’s plenty of beautiful countryside.

We don’t like holidays where we are caught amongst masses of other tourists, and this one was excellent on that account. There are a few touristic places that attract a lot of visitors, but whenever we thought it was too busy, we just got back in the car and drove to a quieter town or sight. That was also no problem during high season.

The people in Bavaria and in Germany are always friendly and polite. They’re proud of their local customs. One evening we saw a performance by the local hobby orchestra on a raft in the middle of the lake. For us it was an unusual sight, seeing people tooting on their French horns in the middle of the water, but it was a wonderful experience. 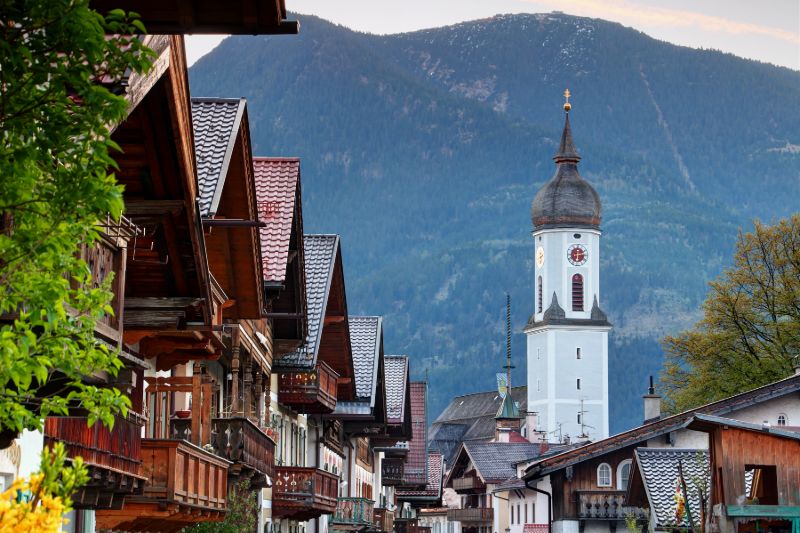 In Bavaria you will find lovely traditional villages and towns.

Was there a lot to do for the kids?

The kids weren’t bored for a minute! There is a reservoir for swimming right next to the campsite, but we found the water a little too cold. We soon found a small lake about twenty minutes away where the water was nice and warm, and which also had a nice sunbathing area… We spent a lot of time there!

The entertainment on the campsite was focused on younger children. But that was fine for us. We went on some nice trips together and the children would regularly retreat for a while with their smartphones. We also allowed the children to choose their own excursions. Our fifteen-year-old son wanted to go karting and our nineteen-year-old daughter chose a castle with beautiful gardens.

Bobo’s tips for sightseeing and excursions in Bavaria

Munich is just over 100 kilometres from the campsite, a nice destination for a day trip. There are all kinds of things to do there. Our son had Bayern Munich’s football stadium on his wish list. We all liked that very much.

Kempten and Füssen are also charming towns that are nice to visit; these places are smaller and you can really taste the southern German atmosphere. Both towns have a nice centre where we had a lovely time shopping and looking around. Via Claudia Camping’s surroundings also boast a few towns that are part of the Romantic Road. This was originally a medieval trade route of almost 400 kilometres between Würzburg and Füssen. Nowadays it is a tourist route. Along the way you will pass beautiful historic towns with half-timbered houses and beautiful castles and palaces in Baroque and Renaissance style. There are many beautiful, historic towns and villages along this route. 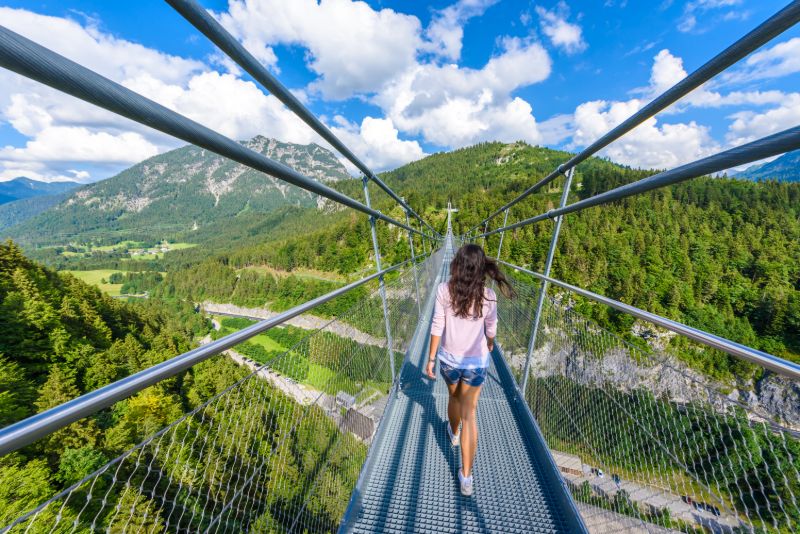 The Highline179 in Reutte, for those who are not afraid of heights!

The suspension bridge at Reutte

For a spectacular trip we crossed the border to Austria, to the Reutte suspension bridge, the Highline179. This spectacular footbridge is 405 metres long and spans over a valley. You’re crossing it at a height of 110 meters! After arriving in Reutte we first had to walk up to the bridge. Then the children crossed the bridge. If you’re afraid of heights, this is not for you. The bottom of the bridge is a grid that you can see through. My wife and I stayed on the side with the dog and enjoyed the view. Reutte is just over 40 kilometres from Via Claudia Camping.

Neuschwanstein castle is a world-famous fairy-tale castle. If it looks familiar to you, it’s probably because Walt Disney used this castle as inspiration for Sleeping Beauty’s castle in Disneyland. The construction of the castle started in 1869 by order of King Ludwig of Bavaria. When Ludwig died in 1886, Neuschwanstein was not yet completed, but shortly thereafter the castle was opened to visitors. The castle was finally completed in 1892. From the campsite it takes half an hour to get there. We were there in the middle of high season and it was very busy. That’s why we decided to admire the castle from a distance and then find a quieter spot. If you want to visit this castle, I would advise you to do so in the low season or to get there early in the morning. You can buy tickets online in advance. 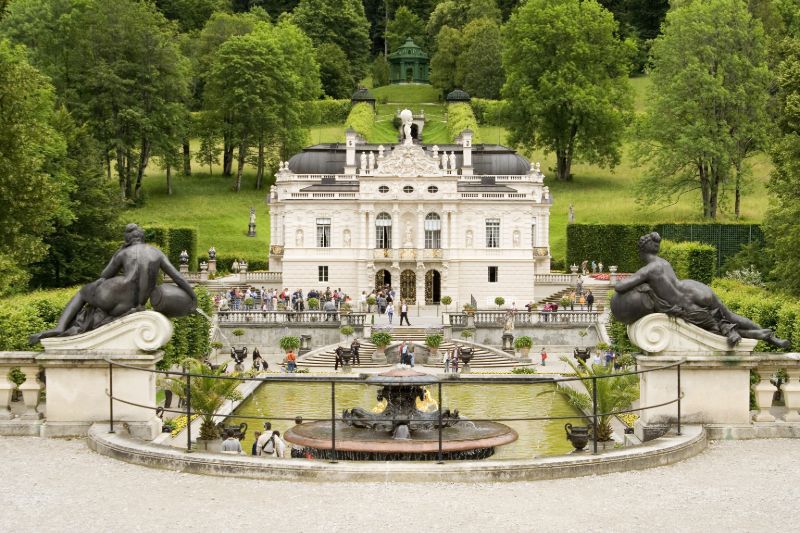 When visiting Schloss Linderhof, don’t miss out on the beautiful castle gardens and the park!

Our daughter wanted to visit the baroque Schloss Linderhof and its beautiful castle gardens. That was a really nice day out. The castle itself was being restored while we were there, so it was surrounded by scaffolding. That’s why we only walked through the beautiful gardens and the park near the castle. The gardens and the park are accessible for free.

Bobo’s practical tips for a holiday in Bavaria

In Bavaria and southern Germany you will find many lakes, also close to our campsite. Great fun when you like to swim outside. It is worthwhile to take a look around the area to find your perfect swimming spot.

Because we had a dog with us that didn’t fit in a bicycle basket, we didn’t cycle ourselves, but this is highly recommended! There is a very good cycling infrastructure here with safe cycle paths. So you can also enjoy cycling with younger children.

Away from the hustle and bustle

There are plenty of sights in Bavaria. Some of them are very popular and well known, such as Neuschwanstein Castle. The downside is that you’re certainly not the only one who would like to take a look. If you are camping in Bavaria during high season and don’t like crowds you should search out the lesser-known places and sights. Often just as charming, but a lot quieter! 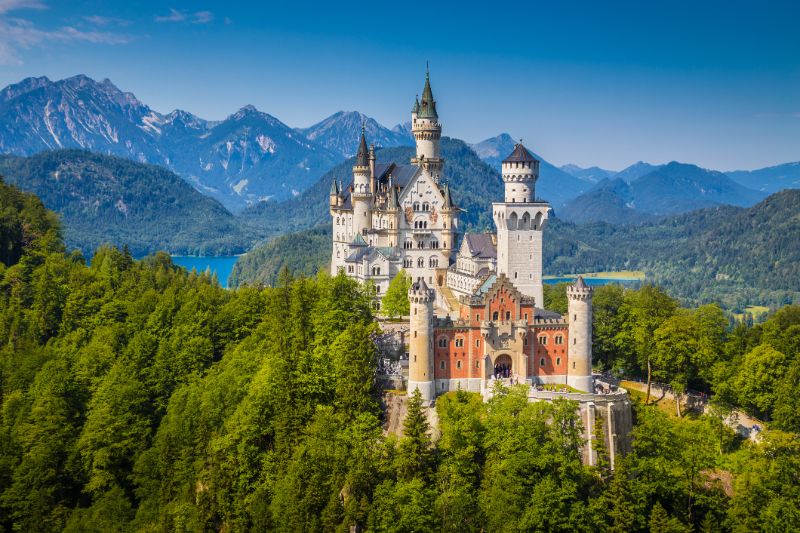 Some trips and sights in Bavaria are rather pricey. For example, we wanted to visit the Zugspitze. This is the highest mountain in Germany. You can go up with a rack railway, but the price for an adult is € 58! We thought that was too expensive. So instead of going up the Zugspitze, we went into Garmisch-Partenkirchen, which is a nice town with a great atmosphere. Fortunately, it was still a nice trip. But it’s a good idea to inquire about the rates in advance to avoid disappointment. 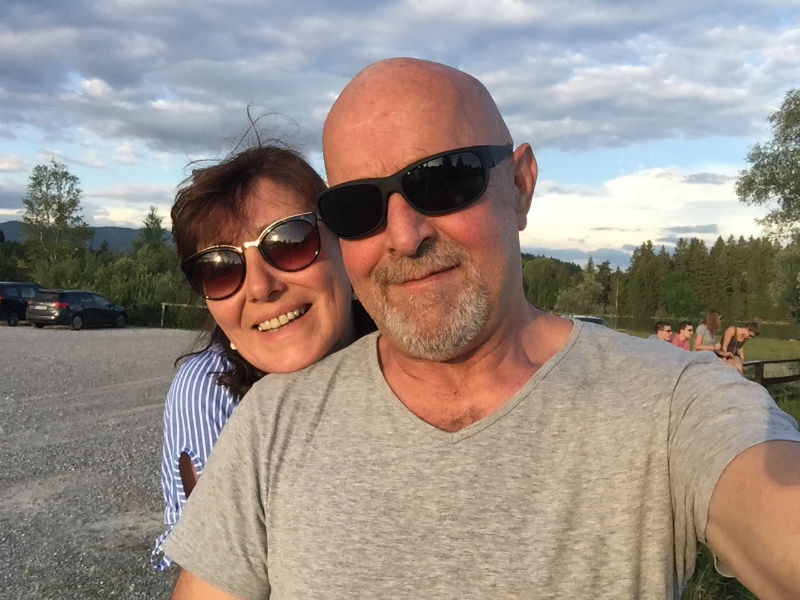