France is famous for its haute cuisine, refined dishes prepared with exclusive products. Yet the country also has delicious regional dishes with only a few, often very standard, ingredients. From east to west and from north to south: in this blog, we introduce you to local delicacies you really must try during your camping holiday in France. Of course, I will also give you tips for campsites with restaurants where you can taste these delicacies.

1. Oysters on the west coast

For one they are the ultimate delicacy, the other thinks they are salty sliminess: oysters always get people’s tongues wagging. If you love them, the French department of Charente-Maritime is for you! Go to Royan, a coastal resort about 100 kilometres north of Bordeaux. Besides numerous restaurants with oysters on the menu, it is also the location of a museum about the shellfish: La Cité de l’Huître (site in French). 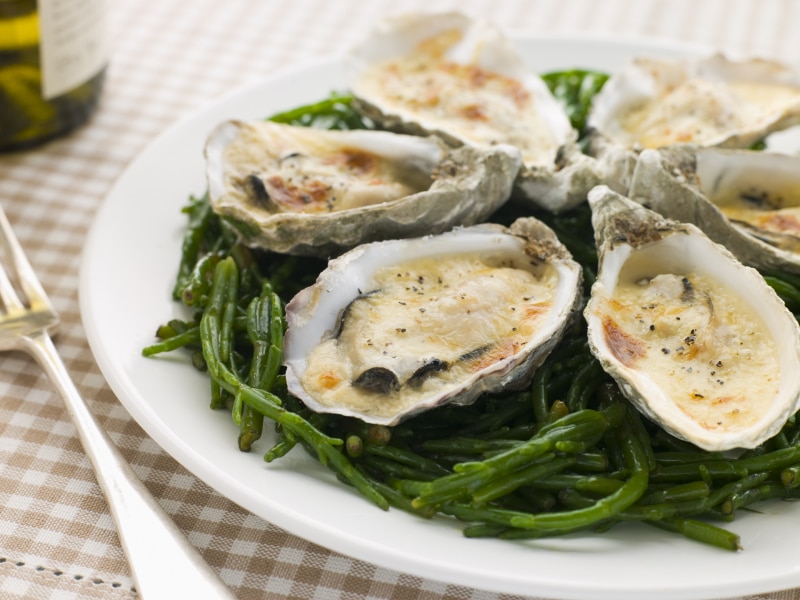 For many, a plate of oysters is a genuine feast. Grab a glass of white wine and slurp away.

Oyster farming also dominates the two islands off the coast of the Charente-Maritime, Ile d’Oléron and Ile de Ré. You can take great cycle rides past endless oyster farms. Don’t be shocked if you come across a genuine oyster vending machine on your trip. If you are wondering why oysters are so expensive it is because human hands handle the average oyster 50 times before reaching your plate. Also consider that half of all oysters die within three years, and it takes at least that long before you can eat an oyster.

Have a wonderful holiday in Charente-Maritime:

The most famous dish from Nice is salade niçoise, of course. This classic dish is now famous all over the world. And that means, there are countless varieties. In fact, according to French cooking, there is no official recipe. However, in most versions of the salad you will find the following ingredients: spring onions, tomato, green beans, small purple artichokes, boiled eggs, anchovies, tuna, olive oil and olives. 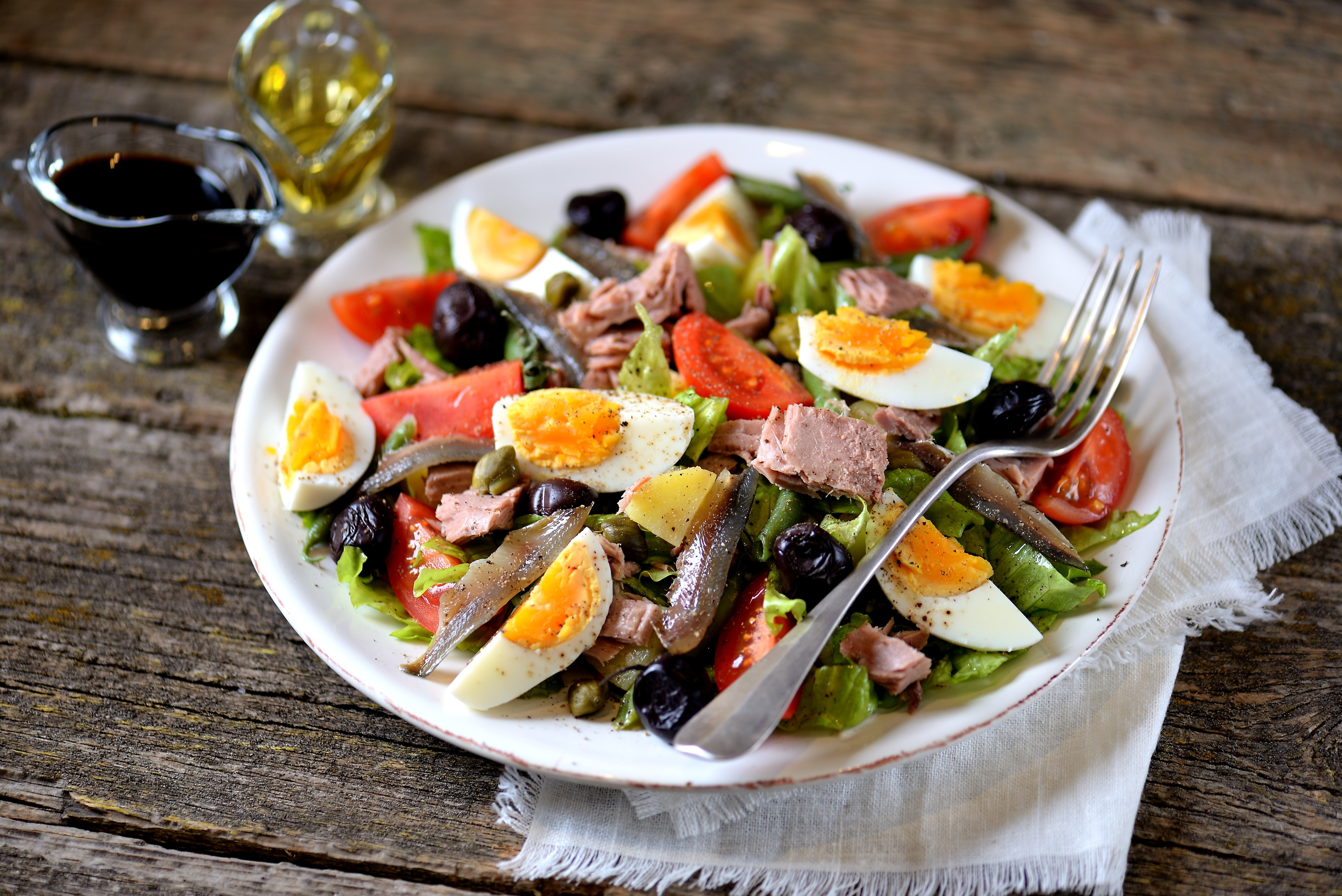 A hearty salad that puts a smile on many a face, that’s the Salade Niçoise!

During your holiday in Nice, or in actually on the entire Côte d’Azur, their nothing nicer than finding a spot at an outdoor café and enjoying a fresh salade niçoise for lunch. And you can even enjoy it at the campsite. After all, you can buy most of the ingredients in the shop or even better, at the market. You add the vegetables raw, so you can leave the pots and pans in the cupboard. Bread lovers can also opt for a ‘pan bagnat’, a sandwich filed with some of the ingredients of a salade niçoise.

They know what good food is in the French border region of Alsace. This is the birthplace of one of the most delicious savoury dishes you have ever tasted: tarte flambée. In neighbouring Germany, they make this thin pizza topped with crème fraiche, onion, bacon and cheese and it is known as Flammkuchen (German) or Flämmekuche (Alsatian). These are also the most common terms used abroad. In Alsace, there is almost no café, bistro or restaurant that doesn’t have tarte flambée on the menu. 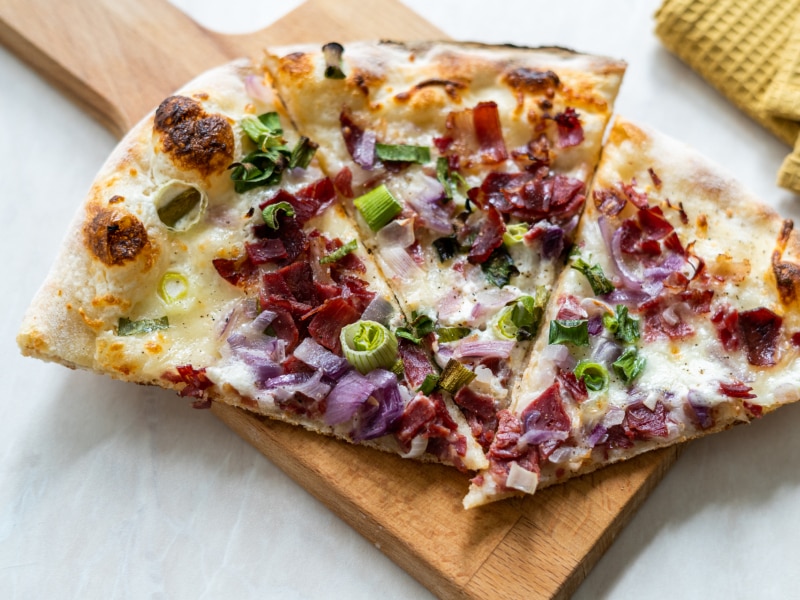 So few ingredients but oh so delicious. Who doesn’t love a slice of tarte flambée?

There are also varieties with other toppings, such as salmon or minced meat. And if you are going to cook it at home, you’re free to vary and experiment of course. By the way, tarte flambée is excellent in combination with a glass of Riesling or Pinot Blanc, two white wines from Alsace. The local delicacies from the Alsace are not the only reason to go on holiday in this exceptional region, read more in this blog!

Here are great places to camp in the Alsace:

Delicious wines are grown in the eastern French region of Bourgogne-Franche-Comté. What about classics such as Pinot Noir (red) and Chardonnay (white)? And the regions of Beaujolais and Chablis will probably also ring a bell. But perhaps less well known is that they also brew excellent beer in Burgundy. It may not be a regional dish like the first three mentioned in this blog, but it is certainly a local delicacy. 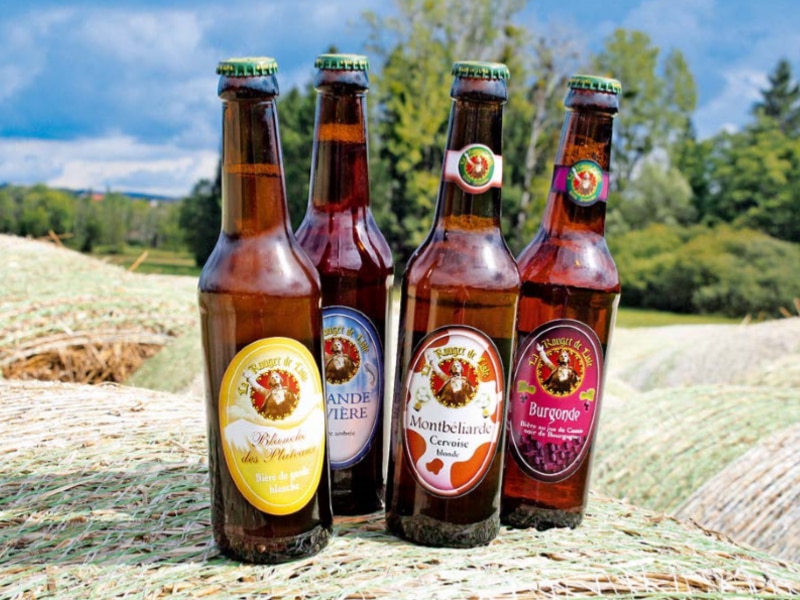 Beer from Burgundy. Not only does it sound catchy, but it’s also very tasty!

Due to the increasing popularity of beer brewing, a few years ago a collective of craft beer breweries was set up, called ‘Brassicomtoise‘. It now has 22 associated breweries. Besides their own beers, each brewery also brews the La Commune (‘the commune’) beer. You can go on guided tours everywhere and have a tasting session. Leave the car behind and opt for a campsite with a brewery within walking or cycling distance. Safety first!

Coyz campsites in the Bourgogne-Franche-Comté:

I like to finish off with something sweet. In Brittany, the sunny costal region in the west of France, they are passionate about baking cake. The name of the most famous cake from the region is kouign-amann. That is Breton for ‘cake’ (kouign) and ‘butter’ (amann). With the amount of sugar and butter it contains, we are talking about a real calorie bomb here. In fact, the New York Times once described the kouign-amann as ‘the fattiest pastry in all of Europe‘. We wrote about 5 famous desserts from Europe in a previous post.

The kouign-amann can rightly be called a local delicacy.

According to legend, the kouign-amann was devised around 1860 by Yves-René Scordia in the coastal resort of Douarnenez, in the region of Finistère. In terms of colour and shape, his creation looks like a round caramelised croissant with the thickness of a sugar loaf. The official recipe is extremely strict but simple: 40 per cent dough, 30 per cent butter and 30 per cent sugar. The kouign-amann was originally a large cake that you cut into slices, but nowadays you can also find smaller versions at the bakers. Yum!

The places for a camping holiday in Brittany:

What are your favourite dishes from the French cuisine? Share them with us and tell us why you like them so much.

The most beautiful lakes in Italy

Do you know the swimming pool rules in Italy?